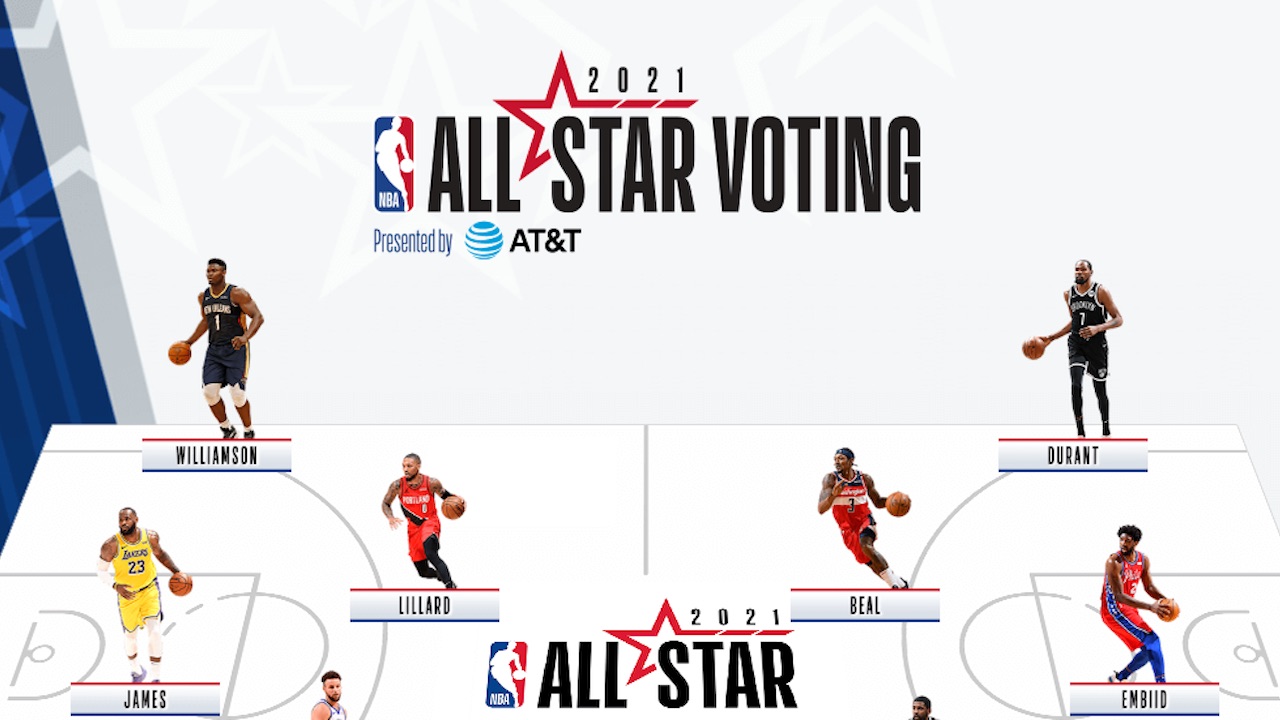 Yes, it appears there will be an NBA All-Star 2021 Game this year, despite the restrictions involving COVID-19. The league is currently working out the details to make sure players can safely participate in the annual contest which honors the league’s top stars. Voting began several days ago, and the early returns reveal that Brooklyn Nets star Kevin Durant is the top vote-getter. That may surprise some, as LeBron James or younger stars tend to have been recent favorites.

Each season, the NBA has held its annual All-Star game, with a weekend full of events. That includes the Three-Point Contest, Skills Contest, and Slam Dunk Contest. The All-Star Game caps off the weekend full of entertainment, and for bettors usually provides an attempt to bet that the two teams will eclipse the over for points.

NBA All-Star 2021 voting got underway towards the end of January. As of Thursday, February 4, we had our first look at who the leaders are in the Eastern and Western Conferences.

Kevin Durant of the Nets is just above LeBron James of the Lakers. They each lead their respective conferences. In the East, Kevin Durant is currently joined by Milwaukee’s Giannis Antetokounmpo and Philly’s Joel Embiid in the frontcourt. In the backcourt is KD’s Nets teammate, Kyrie Irving, and last year’s big snub, Bradley Beal of the Wizards.

Meanwhile, LeBron has an MVP favorite, Nikola Jokic of the Nuggets up front, along with Clippers star Kawhi Leonard. In the backcourt are Golden State’s Stephen Curry and the Dallas Mavs’ Luka Doncic.

NBA All-Star 2021 voting will run until February 16, 2021, with fans able to vote online through NBA’s website.

The teams aren’t officially decided yet, but it’s a no brainer that these games feature generally very little defense unless its close down the stretch. Otherwise, this is a showcase of scoring abilities with highlight plays coming a mile-a-minute from the All-Stars.

Looking back at the previous five All-Star Games here’s the scores:

Just looking at the above scores, they nearly scored 400 points in a few of those recent contests, which is incredible. The 2018 game brought the first edition where the top vote getters in each conference were made captains who drafted their teams from the pool of other All-Stars. That one didn’t reach the 300-point total.

Last year’s went over it by a bit, with the 2019 game reaching 342 total points. It featured LeBron James and the Greak Freek captaining their respective squads in a battle for charity. The game also had a format change in terms of the way scoring worked, which could carry over to 2021.

Right now, the league is still ironing out details on how the game will take place, per ESPN. So stay tuned as the rosters become official once the voting ends and with coaches deciding upon reserves.