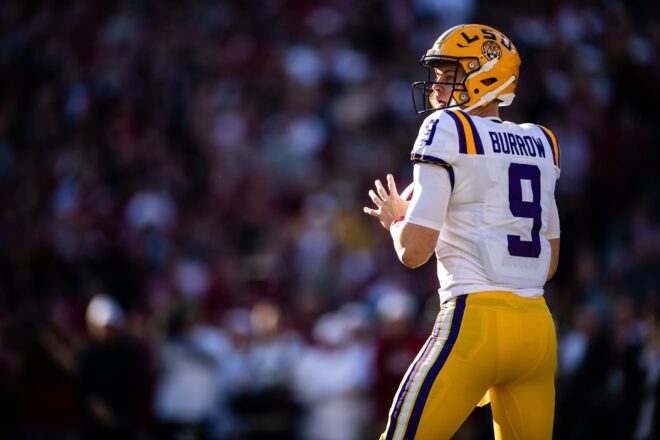 The 2020 NFL Draft is in high gear! As the selections keep rolling in, here is an up to the minute look at the selections along with grades for the top 10 picks.

This is a no-brainer. Burrow looks to have all the skills to be a great NFL quarterback and the Bengals are in a serious rebuild mode. Great selection.

Just like the Bengals at No. 1, the Washington Redskins made the strong yet sensible selection in Chase Young. He was a beast at Ohio State and Redskins fans are hoping he is the real deal in DC.

The Lions made it obvious that they wanted the consensus No. 1 cornerback – and they got him. Okudah will quickly become part of the Leo’s new-look defense that made some major improvements during the offseason.

Kind of a shocker for NY at No. 4. The Giants have a lot of needs, so getting a big fella to help block for their running game makes sense. Many experts believed that the G-Men may be all in on linebacker Isaiah Simmons.

I’m not a huge fan of this pick. With several question marks due to some serious injuries at Alabama, Tagovailoa is a high risk at No. 5

The man Miami let get away! The Chargers snatching up Herbert is a great selection. Last year at this time many thought Herbert could be selected No. 1 overall. The Bolts got a good one at No. 6

The Panthers were one of the worst teams in the NFL last season against the run. Brown should help them improve a ton instantly.

This kid is one of the best on defense in the 2020 draft. Still a bit surprised the Lions, Panthers, and Giants passed on him. He will be a star in the NFL.

Isn’t it hard to believe that this team was fighting the Patriots in the AFC title game just a few seasons go? Now in full-rebuild mode, the Jags will start the process by selecting a top 10 CB in the NCAA game in Henderson.

At 6′ 5″ and 320 lbs, Willis will help strengthen that Browns’ offensive line. With the Browns signing Jack Conklin to play right tackle, Wills will most likely move to the left tackle position to help protect Baker Mayfield’s blindside.

Best of the rest