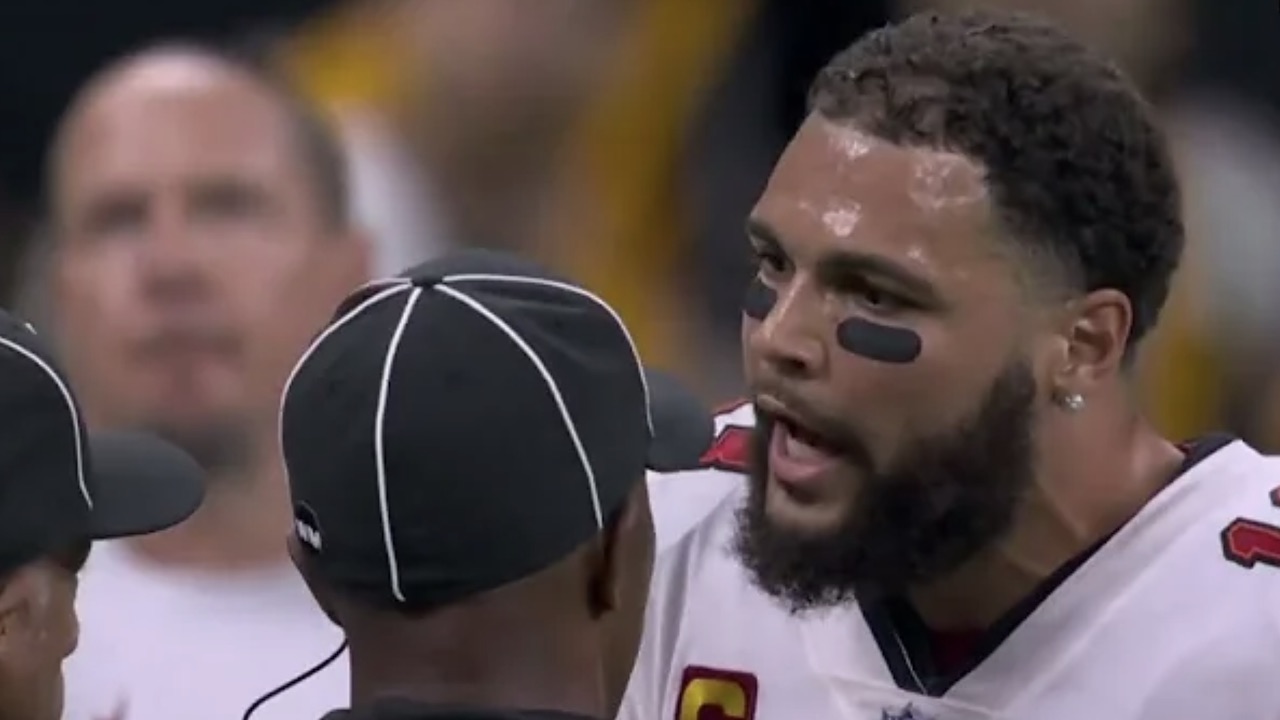 The NFL has suspended Tampa Bay Buccaneers wide receiver Mike Evans for one game without pay. Evans’ suspension arrived after he intervened in a confrontation involving his teammates and the New Orleans Saints Marshon Lattimore in their game Sunday. Due to Evans’ physical interference, he may be sidelined for his team’s next game, although he can still appeal the decision. Even with the news, the Bucs remain slight favorites as they attempt to remain undefeated.

According to AP News, the NFL informed Mike Evans on Monday that he’d been suspended for one game due to a violation of the league’s unnecessary roughness and unsportsmanlike conduct rules. During this past Sunday’s Bucs vs. Saints game, Marshon Lattimore was in a confrontation with Evans’ teammates Tom Brady and Leonard Fournette.

Based on the league’s letter to Evans, they said he’d initially been walking towards his team’s sidelines. However, they indicated after Evans saw his teammates in the confrontation, he ran over and violently threw his body into an “unsuspecting opponent” involved in the confrontation.

“You knocked your opponent to the ground and a melee ensued involving players from both teams,” the NFL’s letter said. “Your aggressive conduct could have caused serious injury to your opponent and clearly does not reflect the high standards of sportsmanship expected of a professional.”

Video highlight clips featuring Evans’ involvement in the on-field confrontation arrived on Twitter, including the one below that shows what went down.

Surprisingly this is the second suspension of Evans’ career. His first also featured him knocking Lattimore down during a Bucs-Saints game. That previous incident arrived in 2017 at the Superdome.

“Like I said, the fighting alone, losing a player for the next game, it hurts our team because we lose a very good ballplayer,” he said.

“We don’t want that, we don’t condone it and we’ve got to move forward and find a way to win without him,” Bowles added. “But that should be a lesson to all our other players.”

If his suspension holds, the Bucs will be without Evans for their upcoming home game on Sunday, September 25. Tampa Bay hosts Aaron Rodgers and the Green Bay Packers. The game takes place at Raymond James Stadium at 4:25 p.m. Eastern Time.

Both teams are coming off victories in Week 2. Tampa Bay defeated New Orleans 20-10 behind a 17-point performance in the fourth quarter. Quarterback Tom Brady finished with 190 yards and a touchdown pass after completing 18-of-34 passes. Evans had three receptions for 61 yards in the game.

In his post-game comments, Brady praised his team’s defense for coming up with big plays when it counted to assist in the win.

The Packers recorded a 27-10 home victory over the Chicago Bears in Sunday Night Football. Rodgers threw 19-for-25 with 234 yards and two touchdown passes in the win.

With Sunday’s wins, Tampa Bay is 2-0 for the season so far, while Green Bay is now 1-1. As of this report, the latest odds have the Bucs favored on the moneyline -135, or 2.5 points against the spread. The game’s over/under points total is currently set at 41.