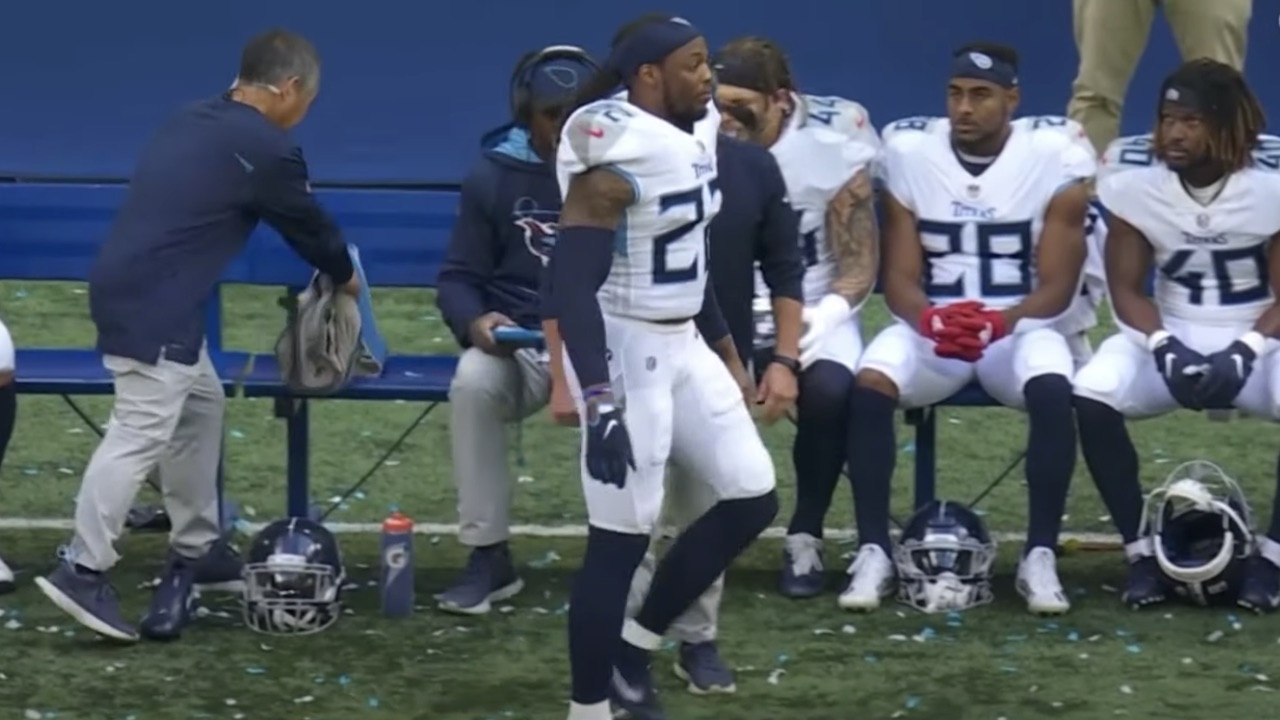 At least two NFL teams took major hits this past weekend, despite adding another victory to the win column. The Tennessee Titans escaped with a narrow victory over the Indianapolis Colts but may have lost their star running back Derrick Henry for the season. The New Orleans Saints also picked up a big win, defeating Tom Brady and the Tampa Bay Buccaneers. However, Winston was seen on crutches after the game. Here are the latest injury updates for these players and how they will affect the teams’ Super Bowl odds heading forward.

Despite a 34-31 victory for the Titans on Halloween 2021, Derrick Henry may have suffered a season-ending foot injury, sources told ESPN’s Adam Schefter. According to Schefter’s tweet, there is concern that Henry has a “jones fracture that would require surgery and end his season.” That would take the top running back away from a Titans team that is currently 6-2 and first in the AFC South.

Henry’s injury occurred in just the first quarter of the Titans game against the Indianapolis Colts this past Sunday. Following a rushing play, Henry was evaluated on the sidelines and attempted to walk a bit. A clip below on YouTube shows the potential season-ending play and some of the aftermath on the sidelines.

Henry, 27, is scheduled to undergo an MRI on Monday to determine the severity of the injury. Losing the top running back would be a serious blow to a Titans team that appeared to be amongst playoff contenders in the AFC. As of this report, Henry was leading the league with 937 rushing yards, which is 353 yards more than the second-best RB.

According to Ian Rappoport, sources say the Titans are planning to work out future Hall of Famer Adrian Peterson as a potential replacement backup this week.

Next up for the Titans will be a Sunday Night Football Game. They’ll visit Matthew Stafford and the Los Angeles Rams in the primetime game.

The New Orleans Saints were also amongst teams that picked up an important win this past Sunday. Their victory also came with a potentially devastating injury, as quarterback Jameis Winston was carted off the field in the second quarter with a knee injury.

Coming in to replace him was Trevor Siemian, who helped keep the Saints ahead and guided them to the 36-27 win over Tom Brady and the reigning Super Bowl champs. However, Winston was seen on crutches after the game.

The Winston injury occurred on a horse-collar tackle by the Bucs’ Devin White, with the refs giving out a 15-yard penalty for the play. Winston landed awkwardly following the tackle, with his left leg getting pinned behind him as he landed, per ESPN.

Based on the latest report, Winston is done for the season, and unfortunately for Saints fans, Drew Brees won’t be coming out of retirement to save them. Siemian and Taysom Hill will be the options going forth for New Orleans. Hill suffered a concussion back in Week 5 but is expected to be cleared to play this week.

The Saints currently sit second in the NFC South with a 5-2 record. They’ll take on a struggling Atlanta Falcons team next on November 7 at 1 p.m. Eastern Time.

So how will these injuries affect the NFL Super Bowl odds? The Tennessee Titans were considered amongst the top contenders in the AFC along with the Buffalo Bills. Without Henry, they’re likely to struggle mightily in their quest to capture the AFC. As of this report, Tennessee is still within the top 10 for NFL teams in the Super Bowl adds (via BetUS). The Saints are a few spots below, with +3300 odds to win the title.

As of right now, the Bills, Bucs, Rams, and Packers are amongst the teams that oddsmakers believe have the best chances to win the Lombardi Trophy. However, fans may want to consider some longshots like Baltimore, Dallas, and Arizona as potential surprise teams.