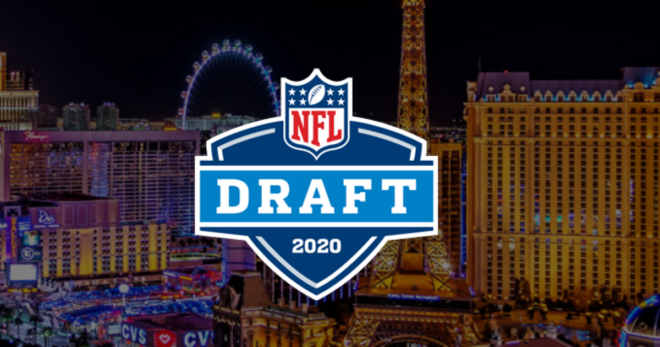 The 2020 NFL Draft is scheduled to take place on Thursday, April 23 and it may be one of the most interesting drafts in decades – and not just because of the talent pool!

What will make this draft more unique than any of the previous? This year the players will be thanking the team that selects them from their homes.

With the sports world on hold right now due to the COVID-19 pandemic, the NFL Draft will not be held in front of thousands of screaming fans while the fresh faces of future NFL talent are introduced for the first time.

It will be held in the virtual world, live online.

Now lets not kid ourselves. The NFL Draft is always a huge event.

Although GM’s, coaches, and owners will be making their selections much differently than years past, many are hoping that the popularity of the draft does not crash the internet.

Cell phones and webcams will be front and center as thousands of players across the US will be watching the 2020 NFL Draft live just like NFL fans as they will be waiting to hear their name called.

Fortunately for gamblers, there are a plethora of 2020 NFL Draft prop bets available for gamblers.

Tua, Burrow and exotics all available to wager on at 2020 NFL Draft

Wagering on NFL and college football has been popular for decades. Now with many states legalizing sports wagering, the online side of it is booming.

When Vegas and other sportsbooks say you can bet on anything, they mean it!

With no sports to speak of to wager on, the NFL Draft prop bets are gaining a lot of attention.

Do you think the No. 1 pick will shed a tear? You can bet on it. How about will a team lose power during the draft?

Yes, you can wager on that too.

The list of prop bets for the 2020 NFL Draft is endless. With some sportsbooks having over 500 props, we have posted a few of the more popular and interesting pros we could find.

Which Team Will Draft Tua Tagovailoa?

Which Team Will Draft Justin Herbert?

Will Joe Burrow be selected No. 1 overall?

Who will be the Second Overall Pick in the 2020 Draft?

Will a player be eating Taco Bell when he is selected?

Who will be the First Wide Receiver Drafted?