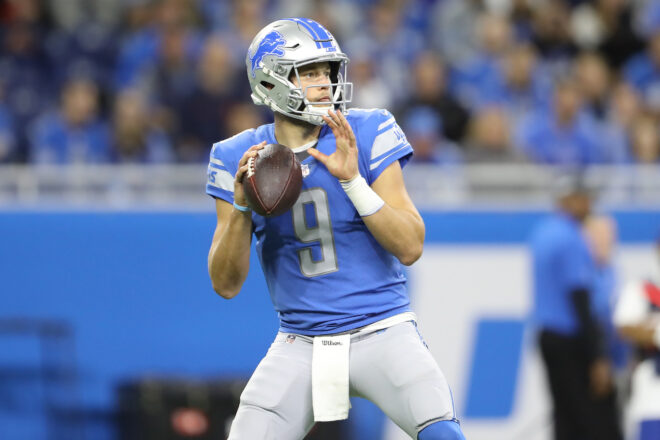 The Detroit Lions and head coach Matt Patricia know that they are heading into a must-win season in 2020. Lions owner Martha Ford made that quite clear at the end of last season.

While the Lions are hoping that a strong showing at the 2020 NFL Draft to go along with the many key free-agent acquisitions, they have signed this past offseason will lead to a great 2020 campaign, they know that the key to winning will come to quarterback Matt Stafford.

The Detroit Lions have tons of talent on both sides of the ball, but to have a shot at the postseason, they need their quarterback Matt Stafford to be at his best.

If the former Georgia Bulldogs star is back to 100-percent, this team will be head and shoulders better than it was last season. That being said, Las Vegas oddsmakers aren’t looking for positive results out of Motown in 2020.

In fact, a look at the early odds indicates that the Lions are only favored in just three games season.

Sure, that can all change quickly, but early on the Lions look to be the underdog in most games in 2020.

On paper, this isn’t pretty.

The Detroit Lions are favored in just three games in 2020, according to 97.1 The Ticket in Detroit. Which means that they’re underdogs in 12 games and an early season, with the other game set at a pick’em.

In the way too early odds, the Lions are favored against Jaguars in Jacksonville, and in two home contests against the Houston Texans and the Washington Redskins.

So that leaves the Lions already set as road underdogs against the Cardinals, Falcons, Panthers, Bears, Titans, Vikings and Packers. They are also dogs at home vs. the Colts, Saints, Bucs, Vikings, and Packers.

Then there are the Jacksonville Jaguars who are listed as underdogs in all 16 games.

On the positive side, if you like to wager on the NFL, you could make some great money on the Lions if they happen to defy the oddsmakers. Detroit has the highest odds to win the North at +850.

Below is the list of each game for the Detroit Lions 2020 schedule along with the early odds.