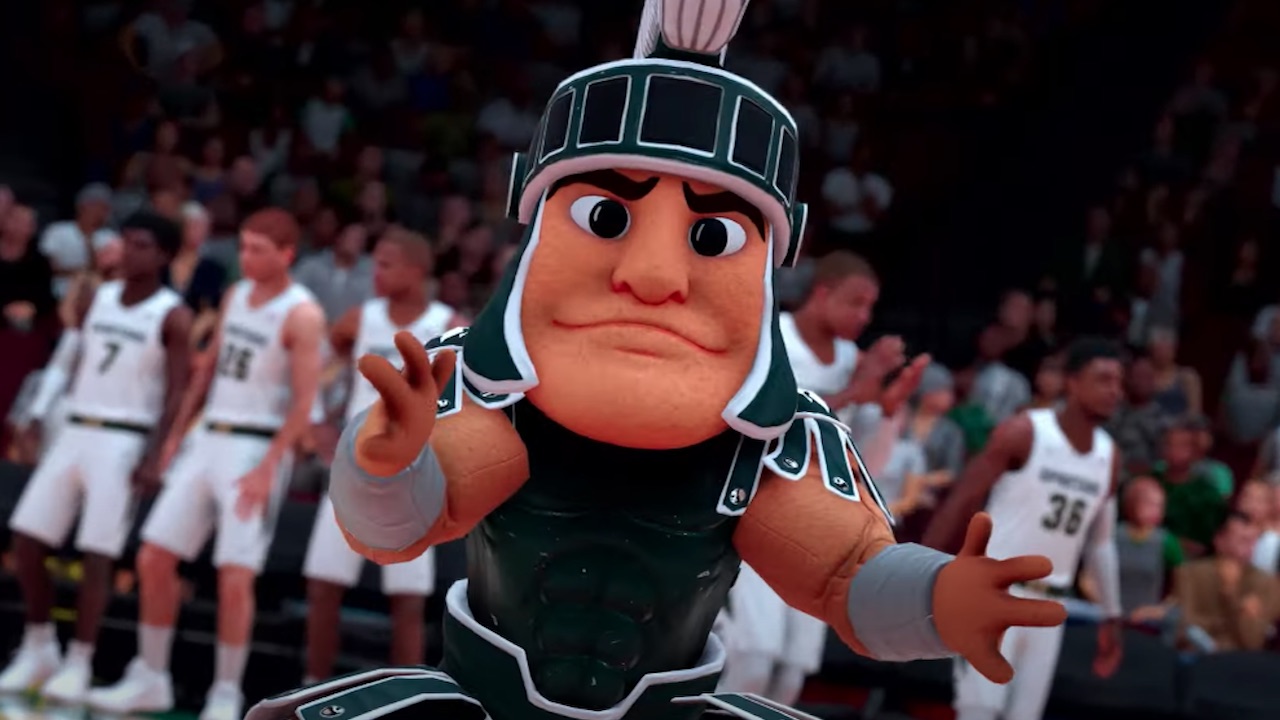 The 2020 college basketball schedule is still up in the air as the coronavirus pandemic has shifted things for many sports programs. However, video game enthusiasts will get to use a number of playable NCAA teams in the upcoming NBA 2K video. There will be 10 NBA 2K21 college teams total including fan favorites like Michigan State, UCONN, Gonzaga, and UCLA.

A first look at the selection of NBA 2K21 college teams arrived in Friday’s MyCareer trailer. In the nearly two-minute-long video, gamers are introduced to the story they can take their customized player through. That will include playing high school basketball, and then joining a college squad. That’s when we get a look at the various teams that the main character named Junior can play for.

In the trailer, Junior chooses the Michigan State Spartans (also a Madden 21 college football team) to play for after high school. From there, we see a quick flash of various NCAA teams’ courts with the halfcourt logos. They include the UCONN Huskies, Oklahoma Sooners, Syracuse Orange, and Gonzaga Bulldogs.

According to 2K’s Courtside Report:

The mode will also include trying to impress scouts at the NBA Combine and an NBA Draft night aspect. Check out the full trailer here.

We should also mention that of the teams included, two of them are currently in the top four when it comes to 2021 championship odds.

Gonzaga is tied with Baylor, leading all teams at +800 odds to win it all. However, Villanova is second, tied with the Virginia Cavaliers at +900. Florida is next of the NBA 2K21 college teams on the list at +1500, per Vegas Insider’s NCAABK odds.

NCAA season postponed for a number of schools

While there’s excitement over the virtual game with NBA 2K21 college basketball teams, real-world hoops is a different story. Several weeks ago, PAC-12 announced the postponement of all sports until sometime in 2021. Joining suit with that decision was the Big Ten, however, there is an interesting lawsuit brought by football players to overturn the conference’s decision.

As far as conferences that haven’t fully postponed or shut down the potential for basketball this year, there is talk that the NCAA is considering a Nov. 25 or Dec. 4 start date. They are leaning towards an earlier date for when they have vacant campuses, allowing for more of a bubble environment.

That could mean some conferences will play basketball late in 2020 including the ACC, SEC, and Big 12. Stay tuned as details arrive, but for those who want to get some college basketball virtually, pre-order NBA 2K21 which arrives on Sept. 4 for PS4, Xbox One, Switch, and PC.