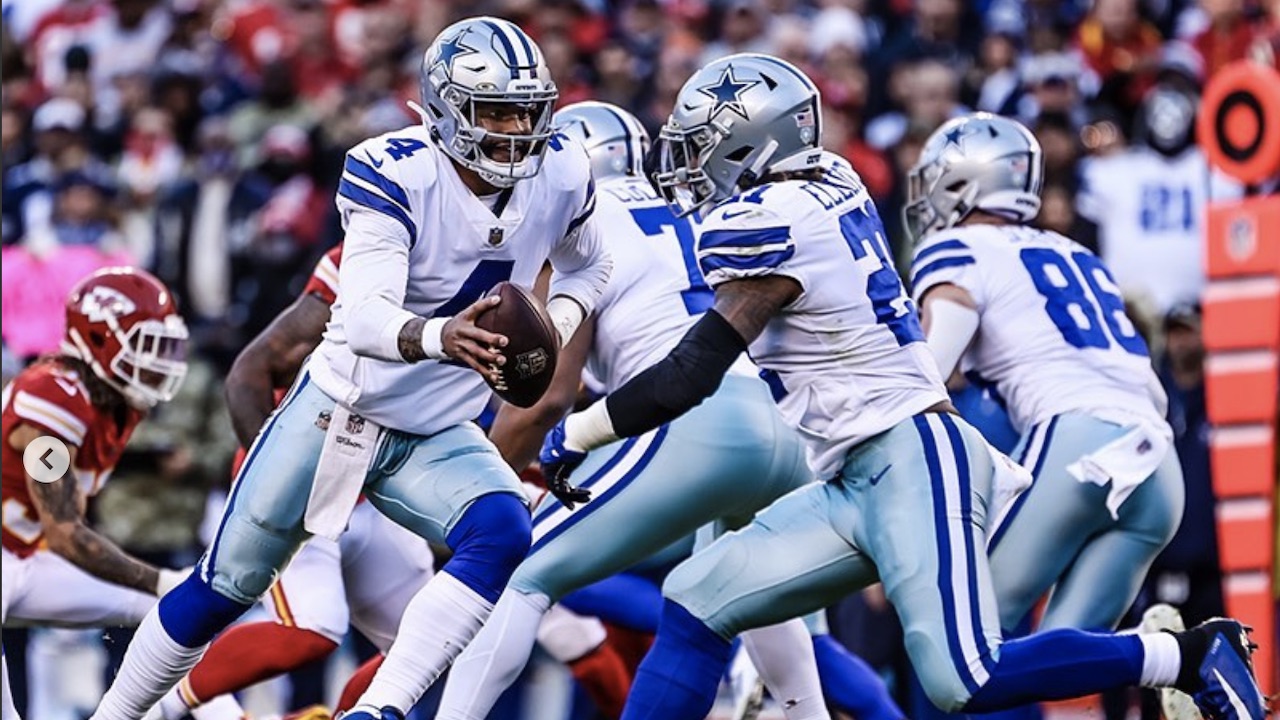 Thanksgiving Day and NFL football have a strong tradition together. This year will be no different. With three games on the NFL schedule – and two on the NCAA docket, pigskin fans can enjoy wall-to-wall football from noon until midnight! Among the teams in action are the NFL’s Chicago Bears, Detroit Lions, and Dallas Cowboys, with a battle of Mississippi schools also on the slate.

There are three games on the Thanksgiving Day NFL schedule for 2021, starting off with an NFC North rivalry. At 12:30 p.m. Eastern Time, two struggling squads, the Bears and Lions go head-to-head in Detroit.

The Bears are coming off a tough home loss against the Ravens this past Sunday, with rookie quarterback Justin Fields having to leave the game.  Detroit also lost by three points on the road in a tight battle against the Browns.

Bears fans may not know if Fields will be starting at QB following the tough shot he took Sunday against the Ravens. Early reports indicate that X-rays were negative on Fields, who is believed to have just suffered bruised ribs.

Current odds have the slightly better Chicago Bears (3-7 overall, 1-4 away) favored by 3.5 points on the spread or -180 money line. As an underdog, bettors can get winless Detroit at a price of +155, with the over/under at 41.5 points.

Next up on the slate, viewers can watch America’s team, the Dallas Cowboys hosting the Las Vegas Raiders. Much like Chicago and Detroit, these teams are needing rebound victories. Dallas lost on the road to Kansas City, dropping to 7-3 for the season. The Raiders fell 32-13 at home to the Cincinnati Bengals and are currently 5-5.

Gametime is 4:30 p.m. Eastern Time on CBS with former Cowboys QB Tony Romo likely in the booth. As of our initial report, Dak Prescott and the Cowboys are favored by a touchdown at home, with the over/under at 51 points. On the moneyline, bettors can pick up the underdog Raiders at +260, or favorites at -330.

Last on the pro football schedule for Thanksgiving will be the New Orleans Saints hosting Josh Allen and the Buffalo Bills in primetime. This game arrives on NBC at 8:30 p.m. Eastern Time. These squads are also coming off losses with Buffalo losing at home to Indianapolis and New Orleans falling on the road to the Eagles this past Sunday.

The current point spread is four points in favor of the visiting Bills, a team that has struggled lately. The Saints are +175 home underdogs, with the points total at 46.5 currently. Based on the latest details, it’s unknown whether New Orleans will go with Trevor Siemian or Taysom Hill as their QB.

Visit BETUS through our links or banner ads to get updated odds on any of the games mentioned.

There are just two games on tap for college football fans on Thursday. Starting at 3:30 p.m. Eastern Time, viewers can watch the Mountain West’s Fresno State battle San Jose State. Currently, the visiting Bulldogs (8-3) are favored by 7.5 points with an over/under at 52.5 points right now.

Coming in hot at 7:30 p.m. Eastern Time is a battle between the SEC’s #12 Ole Miss and No. 25 Mississippi State. The Rebels are 9-2 overall with a 5-2 SEC record. The Bulldogs, who will host this one at Davis Wade Stadium, are favored by just a point right now. This game’s over/under is hovering around 61, as of this report.

Ole Miss has won three straight now including a 31-17 victory at home against Vanderbilt on Saturday. They’re led by their Heisman hopeful quarterback, Matt Corrall, currently third in the future odds to win. The Bulldogs are winners of their last two games including Saturday’s 55-10 beatdown of the Tennessee State Tigers. It should be quite the battle of in-state rivals and Top 25 college teams.

While Thanksgiving Day is full of football from both the NFL and NCAA, below is a look at the complete NFL schedule, odds, and best bets.

Be sure to check out our Week 11 NFL best bets, as we posted a winning day for Sunday’s slate, and as always check out the Sports Odds Digest football news page to get more updates.