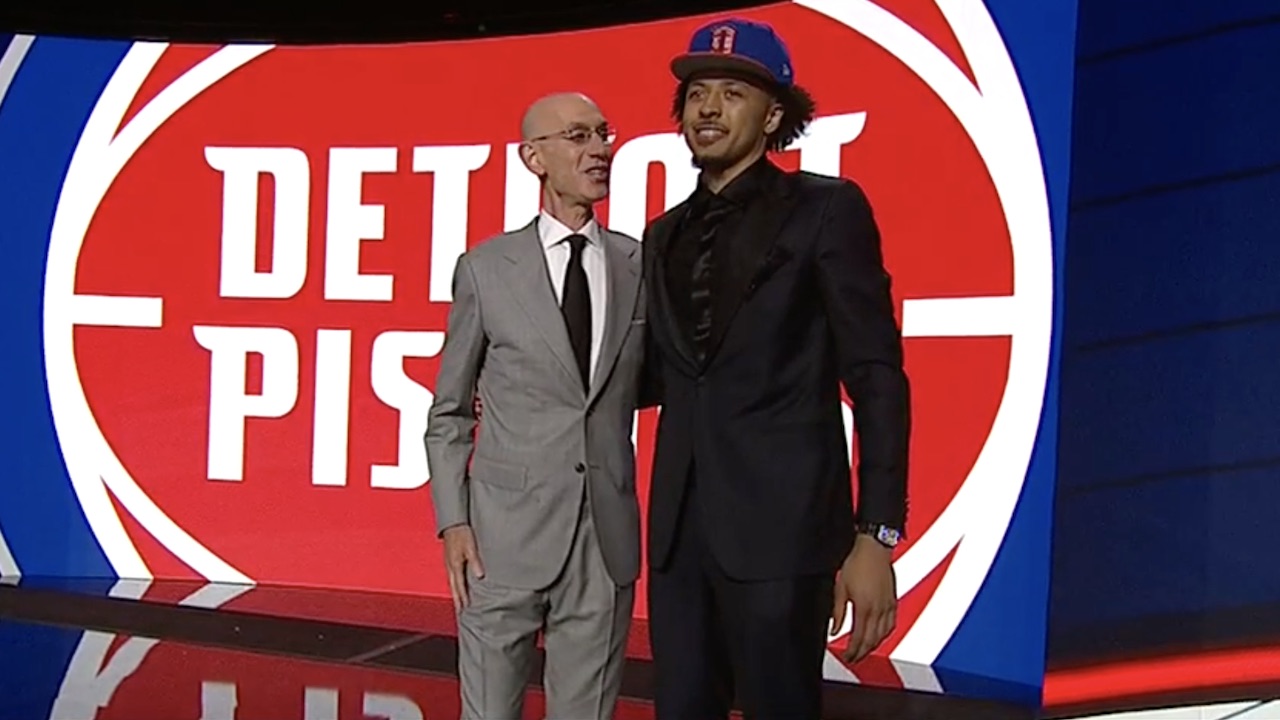 There was no question about it when it came to the top talent heading into the next class of rookies. On Thursday evening, the Detroit Pistons made the smart pick, selecting guard Cade Cunningham first overall in the 2021 NBA Draft. Cunningham will certainly bring immense talent to the team and seems more than happy to be with the organization. They’ll need to help based on a lack of recent playoff appearances and very little success over the past decade.

Cade Cunningham revealed as Pistons’ No. 1 pick in draft

The Pistons have had some hits and misses over the years when they’ve held a top-three NBA Draft pick. In 1981, they wisely chose Isiah Thomas, who led the “Bad Boys” teams to two titles. The 1994 draft saw them select Grant Hill third overall. Despite injuries affecting his career, he was still an All-Star and a major star in Motown.

Perhaps, one of their biggest mistakes in recent memory was Darko Milicic, who was taken second overall in 2003. That was the famous draft where a few guys named Carmelo Anthony, Chris Bosh, and Dwyane Wade were selected after Darko.

With Thursday night’s No. 1 pick in the 2021 NBA Draft, the Pistons are hoping that they chose right, and based on most analysts’ consensus, he is going to be a star. Cade Cunningham will join the struggling team, hoping to become the face of the franchise. and lead them back to success.

The 19-year-old is 6-foot-8 and weighs in at around 220 pounds. Listed as a point guard, that gives the Pistons a dynamic player with some height to further boost their ailing lineup. At Oklahoma State, Cunningham averaged 20.1 points, 6.2 rebounds, 3.5 assists, and 1.6 steals in 35.4 minutes per game.

Cunningham, along with others on the Cowboys, led the team to a 21-9 overall record and earned a spot in the NCAA Tournament. They’d defeat the Liberty Flames in the first round, before being upset by Oregon.

Schmitz even said there’s a possible argument that Cunningham is in the top three for No. 1 picks in the last decade. Keep in mind that includes Zion Williamson, Ben Simmons, Anthony Davis, and Kyrie Irving. However, Schmitz is referring to Cade having “almost zero holes in his game” and believes he’ll be a “longtime All-Star.”

Cunningham only worked out for Pistons, ‘loved Detroit’

The No. 1 pick spoke with ESPN’s Malika Andrews ahead of the NBA Draft. She mentioned he only worked out for one team, the Detroit Pistons, and asked his thoughts on them.

“I loved Detroit. I think you know, the facilities were big time. The people throughout the organization were really good people and I think they got a lot of things going for them in the future. So, definitely a good organization, and if they take me I’d definitely be happy to be in there,” he told Andrews.

He said he had a chance to explore the city a bit and was able to check out a Detroit Tigers game, where the crowd started to chant for him, which was great. He mentioned overall it was a great trip and the city showed him lots of love.

The city is likely to show him lots more love if he can help get the Pistons back to the playoffs. The team finished at the bottom of the Eastern Conference with a 20-52 record, going 13-23 at home, and 7-29 on the road. It was the team’s second-straight absence from the NBA Playoffs and their eighth absence in the past decade.

Recent futures odds ahead of the 2021 NBA Draft had the Pistons listed as +65000 to +400000 longshots to win the title next season, at various sportsbooks. Will Cunningham change their fortunes? Detroit and its fans certainly hope so.