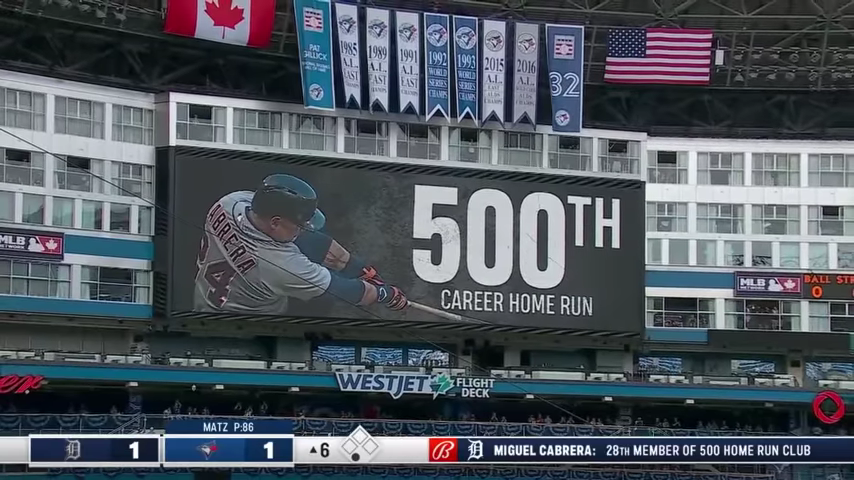 Miguel Cabrera is a sure first-ballot Hall of Famer, that we know. On Sunday, Cabrera added to his resume, joining one of the most exclusive clubs in baseball.

ESPN reports that Cabrera became the 28th member in MLB history to enter the 500 home run club with a sixth-inning blast for the Detroit Tigers on Sunday against the Blue Jays in Toronto.

Cabrera connected on a 1-1 pitch from left-hander Steven Matz, sending the ball over the scoreboard in right-center field. The 400-foot homer tied the score at 1. The Tigers won the game 5-3 in 11 innings.

While Tigers fans would have loved to see Miggy hit No. 500 at Comerica Park, the nearly 15,000 fans at Rogers Centre gave the 38-year-old a standing ovation as he rounded the bases. He even got a curtain call from the hometown crowd, which is something you don’t see in sports that often.

Now that Miggy has hit his 500th bomb, which active players have a chance to reach the 500 home run milestone?

The closest player zeroing in on 500 home runs is Tampa Bay Rays slugger Nelson Cruz. At 41, Cruz is sitting 57 home runs away from 500. He is in great shape for his age and should hit the magical number – that is if a team takes a chance on him for a season or two.

Behind Cruz are some of the best in the game today. New York’s Giancarlo Stanton has 332 bombs while Mike Trout sits at 310. Philadelphia’s Bryce Harper has 255 round-trippers while San Diego’s Manny Machado has hit 245.

Will any of these stars hit the magical 500 mark? While they all are on a good pace to do so, don’t be surprised if they don’t.